The the aftermath of the mission covered in The Captain’s Vengeance, Dewey Lambdin’s naval hero, Alan Lewrie had returned to Jamaica to general acclaim. His seizure of the Spanish treasure ship had made himself and his superiors wealthy men and the piracy ring had been suppressed thereby demonstrating the long reach of the British navy. But his triumph was to be short-lived. In a private dinner with the deputy to the commander of the Jamaica Station, Lewrie finds that while the squadron is planning an exciting, and possibly profitable, mission against Spanish shipping, Lewrie will not be involved. Instead, he is being sent to Halifax, Nova Scotia.

END_OF_DOCUMENT_TOKEN_TO_BE_REPLACED 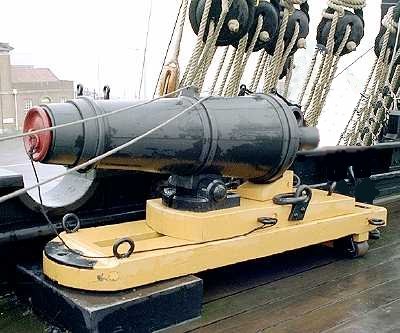 Warfare through the ages has been driven by the measure-countermeasure struggle between armor and armament.

Sometimes a breakthrough significantly shifts the balance one way or the other and changes warfare at least temporarily. Castles and armor dominated for a while but were driven into obsolescence by gunpowder. In our own era we’ve seen the tank reign supreme (World War II), have it’s death proclaimed with the advent of the man-portable guided missile and shaped charge (the Sagger missile during the Yom Kippur War) and then reemerge to dominate the battlefield thanks to the high velocity smoothbore cannon, reactive armor, and other advances in armor (the M1 Abrams).

The same saga played itself out at sea where naval architects had to deal in the assorted trade offs of weight distribution, handling, and the tensile strength of their basic construction material, wood.

END_OF_DOCUMENT_TOKEN_TO_BE_REPLACED

Sea of Grey is the tenth of the Alan Lewrie novels by Dewey Lambdin.

A Sea of Grey picks up at the conclusion of King’s Captain. Regaining control of his ship in the aftermath of the mutiny at The Nore, Lewrie joins the squadron of Admiral Adam Duncan blockading the Dutch port of Texel.

END_OF_DOCUMENT_TOKEN_TO_BE_REPLACED

It is 1796 and Admiral Sir John Jervis has just succeeded Admiral Sir William Hotham to command of the Mediterranean theater. A previous obscure Corsican artilleryman is beating the unbeatable Austrians like a rented mule and the various Italian states are falling like dominoes.

Jervis decides to send a small squadron into the Adriatic to harry French commerce and to demonstrate support to both Venice and Austria.

END_OF_DOCUMENT_TOKEN_TO_BE_REPLACED

The Gun Ketch covers the year 1793 in the career of Dewey Lambdin’s naval character, Alan Lewrie.

As the story opens in January, 1793. Lewrie has been living for 4 years as a tenant farmer on the estate of Caroline’s uncle, Phineas Chiswick. Lewrie is bored. His grandmother has died living him well off financially. He has three children. He was called up in 1791 for six weeks during the Nootka Sound crisis but the rest of the time he’s been on half pay. He also has feelings of inadequacy as he simply isn’t mastering farming the way he did seamanship, even though the has applied himself diligently. He and Caroline, because of the circumstances of their wedding (see The Gun Ketch) finds himself socially isolated for the local gentry.

As war with Revolutionary France becomes inevitable he receives a message from the Admiralty directing him to report to London for an assignment.

END_OF_DOCUMENT_TOKEN_TO_BE_REPLACED

The Gun Ketch covers the years 1786-1789 in the career of Dewey Lambdin’s naval character, Alan Lewrie.

It opens with Lieutenant Alan Lewrie in England after his return from the Far East as chronicled in The King’s Privateer. While awaiting his new ship, the converted bomb ketch HMS Alacrity, he takes advantage of this opportunity to visit the Chiswick family, North Carolina loyalists with whom he became acquainted during the American Revolution (see The French Admiral) and with whom he renewed that acquaintance before his last commission. He finds the family well situated as tenant farmers on the Surrey estate of the brother of the family patriarch, with the older brother, Gouvernour, married into the family of the local squire, Sir Romney Embleton.

The file of characters, ships, and literary references from Dewey Lambdin’s Alan Lewrie novels has been updated to include the King’s Privateer.

Age Of Sail
Blog at WordPress.com.