We’ve chronicled in several places the success of British ships in cutting out expeditions and small boat actions. One is left in awe of the casualness with which British sailors took on impossible odds and carried the day. Often they did it with few if any casualties.

Cutting out an enemy ship, or an enemy convoy, was a high risk activity and fraught with danger. Because repeated success breed hubris, there seems to have only rarely been a consideration made that an action was ill advised. Because of that sometimes things did not go according to plan. END_OF_DOCUMENT_TOKEN_TO_BE_REPLACED

I’ve note on a couple of occasions that it is rather incredible what the British sailor was able to accomplish (here | here). He established a psychological ascendancy over his foes that was so pronounced that he believed himself to be invincible and, surprisingly, his enemies often went along with him.

In the summer of 1812, HMS Barracouta (18) – a ship we’ve earlier encountered – was operating near Bantam in what is now Indonesia. While at anchor a group of natives rowed out and told the captain that if he would send a boat to a rendezvous on shore they would provide the sailors with fresh food.

Lieutenant Tyrell with eight men was sent in the launch, but being cautious they were heavily armed. They arrived at the rendezvous but the promised supplies were not ready so the men made camp to spend the night. The next dawn they noted a proa standing offshore. They thought it suspicious and kept it under observation. As they prepared breakfast, they saw the proa moving towards them. Tyrell ordered the launch loaded – just in case – and as the proa got closer they could see it was full of men. Tyrell says he “therefore thought it prudent to get off.”

[T]he proa both out-sailed and out-rowed us. When she came near they began to fire. I was now convinced they were pirates, and determined to board them, knowing that to be the only chance; for, if they took us, they would have put the whole of us to death. As soon as we came alongside, we cleared our way with, our muskets, and jumped on board the proa. There were about 50 men in her, and we only nine. In about half an hour we cleared her. By this time we had drifted near the shore, and the few then remaining jumped overboard. I observed four or five reach the shore, most of them wounded. I had two men killed; the other six had no wounds of consequence. Just then the Leda [ed note, Leda was a 36 gun frigate under Captain George Sayer, whom we’ve already met] appeared in the offing, and we took our prize on board her, and got to the Barracouta about noon.

The Boats of HMS Galatea 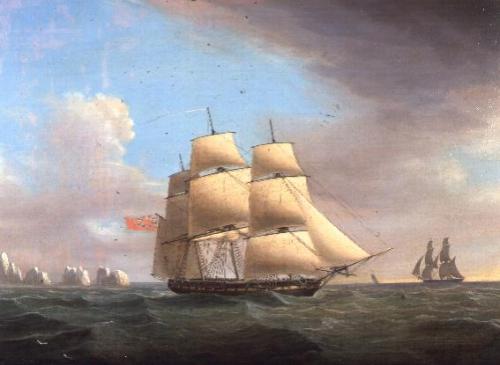 On the morning of 21 January 1807 HMS Galatea (38), Captain George Sayer, was off the coast of Venezuela when she sighted a sail steering for Guaira near Caracas. Galatea put on more sail and as they closed, identified her as a man of war. They were seen at the same time and the unidentified ship changed her course for Barcelona, some 160 miles to the east.

By noon Galatea was becalmed while the strange sail had the benefit of a slight breeze and two hours later her top-gallant sails were scarcely above the horizon. Under ordinary circumstances one would assume that the chase made an escape but this wasn’t an ordinary circumstance.