The Gale at The Nore. Part 5. Climax. 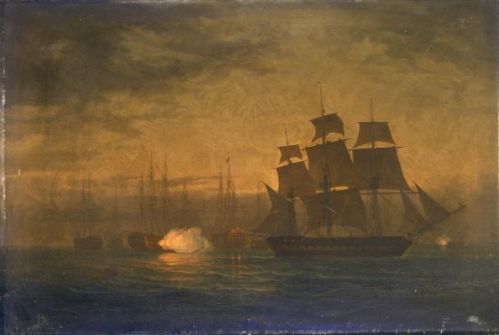 HMS Clyde escapes from the mutinous fleet at The Nore

When we last visited the mutiny at The Nore, the Lords Commissioner of the Admiralty had departed their conference with the mutineers disappointed. Their offer, to apply the same conditions as those received by the mutineers at Spithead and to offer them a royal pardon, was rejected by the delegates.

It was now obvious that lines were being firmly drawn. On the one hand the controlling forces behind the mutiny at The Nore, and those forces weren’t necessarily the delegates themselves, were unwilling to settle for less than their demands — and their actions actually lead one to believe that no concessions by the government were going to end the mutiny but rather the demands represented a ever moving set of goal posts — and the government did not feel that it could given into mutineers so soon after caving to the Spithead mutiny.
END_OF_DOCUMENT_TOKEN_TO_BE_REPLACED

The Gale at The Nore. Part 4. Negotiation

I’ve come to the conclusion that I’m a victim of adult onset attention deficit disorder. Right now I have three (the Nore Mutiny, Hoste’s Adriatic campaign, and the Mauritius Campaign), maybe four (the Battle of Copenhagen), series of posts started and incomplete.

I’m returning to the Gale at the Nore series and will attempt to bring this series to closure over the course of the upcoming week.

When we last visited the happenings at the Nore, the mutiny was foundering. The mutineers at Spithead had settled their grievances and returned to duty. The mutineers at the Nore were late on the scene and for reasons as much of pride as anything else refused to accept the Spithead terms and held out for still more concessions by the government.

Having settled the Spithead mutiny without bringing the Channel Fleet to its knees, the Admiralty entered into negotiations with the Nore mutineers. The first round on negotiations, those carried out by Admiral Buckner, failed miserably with Buckner being rudely received aboard HMS Sandwich and HMS Inflexible threatening to fire into Sandwich if his terms were accepted.

END_OF_DOCUMENT_TOKEN_TO_BE_REPLACED

The Breeze at Spithead. Part 8. The Second Spithead Mutiny.

When faced with the resolve of the Fleet, Spencer folded like a cheap suit.

He arrived in London at 9 am on April 22 and by 5 pm he had hammered out an agreement to meet the terms of the men at Spithead and was enroute to an audience with King George III on the subject of a royal proclamation of pardon. At 9 pm the pardon was signed and on its way to the printers. The copies of the pardon were delivered to Spithead early on April 23.

At 11 am the proclamation was delivered to the captains of the ships at Spithead and read to the crews. Aboard Royal George the men cheered and Lord Bridport’s flag was again raised over his flagship. Queen Charlotte, mindful of the fate of the Culloden mutineers, was skeptical. Questions were raised as to the authenticity of the pardon and the delegates eventually demanded to see the original bearing the king’s seal and signature. Eventually everyone was satisfied that a deal had been struck.

Queen Charlotte struck the red flag. One by one other ships followed suit, leaving Spithead for St Helens to await a suitable wind to set sail, until only Ramilles, Marlborough, Minotaur, and Nymphe held out over the fate of some of the officers assigned to those ships. The driving issue in two of these ships, Marlborough and Nymphe, was the removal of the captains of those ships who were in the habit of belaboring seamen with their speaking trumpets.

All seemed well. Unfortunately, then, as now, the culture within bureaucracies seems to have “do nothing” as its default setting rather than “do something.”

On April 22, Spencer notified the Privy Council that he had agreed to the increase of pay and provisions. The Privy Council did what any bureaucracy would do in dire circumstances; it formed a committee to study the agreement. The committee reported back on May 3 and Pitt brought the legislative package to the House of Commons on May 8 thereby winning at least an Honorable Mention in any “Too Little, Too Late” contest.

END_OF_DOCUMENT_TOKEN_TO_BE_REPLACED

The Breeze at Spithead. Part 7. The Ante Is Raised

The Spithead Mutiny demonstrated a high level of centralized planning, iron discipline, and a shrewd understanding of the British public.

By keeping their demands small, e.g. a pay raise after 150 years without one, a chance to go ashore, better food, it was impossible to portray them as a radical element though Spencer, via the newspapers aligned with his party such as The Times, attempted to do so. The average working man could understand low pay, inadequate food, and being turned out by one’s employer when he was injured.

By professing to be prepared to fight the French at a moment’s notice it was impossible to lump them in with domestic revolutionaries or to paint them as tools of the French.

Their decision to limit the mutiny to ships of the line and insisting that frigates and sloops go about their business of protecting British commerce was nothing short of inspired. This demonstrated to the rising British middle class as nothing else could that their grievances were limited and they remained committed to the defense of the realm.

Indeed, on April 19 the mutiny took on a Gilbert and Sullivan air when the Prince of Wuerttemberg who was betrothed to Charlotte, Princess Royal, visited Portsmouth. Spencer and Bridport took him on a tour of the fleet and the sailors, ostensibly in a state of mutiny, turned out to cheer the royal couple. END_OF_DOCUMENT_TOKEN_TO_BE_REPLACED

END_OF_DOCUMENT_TOKEN_TO_BE_REPLACED

The Breeze at Spithead, Part 5.

Shortly after the men of HMS Queen Charlotte manned the shrouds with the cheer that set off the Spithead Mutiny, the leaders from that ship set out in a boat to visit all the ships in the Channel Fleet. At each ship they boarded and directed the ship to send two delegates, a term that would cause a lot of misunderstanding at Spithead and government recalcitrance at The Nore, to the Queen Charlotte that evening.

Generally, this went off without a hitch though Admiral John Colpoys aboard HMS London tried to prevent the delegates from coming aboard and was only restrained from having his marines fire on them by the intervention of Bridport.

Bridport tried to convince the mutineers aboard his ship that he would send their demands to the Admiralty and they should return to their duty and await an answer. Having waited in vain for over a month for an answer from Lord Howe, whom they greatly respected, they had little confidence in Bridport’s ability to get their grievances addressed by Admiralty. They probably also knew that they had crossed the Rubicon by refusing to make ready for sea and that at the very least the leaders would be hanged if they relented.

END_OF_DOCUMENT_TOKEN_TO_BE_REPLACED

The Breeze At Spithead, Part 4.

The men of the Channel Fleet waited patiently throughout the month of March and into April for a response to the appeals for higher wages they had addressed to Lord Howe. By early April, though, it became apparent that no redress was planned and their man-to-man request of a flag officer they held in high esteem had been dismissed without an answer.

END_OF_DOCUMENT_TOKEN_TO_BE_REPLACED

Age Of Sail
Create a free website or blog at WordPress.com.