We wrote earlier about the heroism and early death of Captain Robert Faulknor.

Faulknor is an interesting character who demonstrates much of what was right and wrong of the system used by the British Navy to select and promote officers during the Age of Sail.

END_OF_DOCUMENT_TOKEN_TO_BE_REPLACED 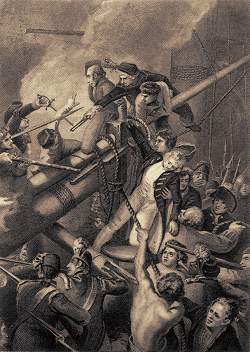 In January 1795, HMS Blanche, a 32-gun frigate, 12-pound main battery, under Captain Robert Faulknor was patrolling off Pointe-à-Pitre, Guadaloupe. Captain Faulknor arranged to look in on the harbor at Guadaloupe by arriving during the night, heaving-to about out four miles out to sea, and creeping in so he could look into the harbor at first light. Early on the morning of January 4, HMS Blanche found Picque, a 36-gun frigate, at anchor just outside the harbor. Picque was disinclined to fight and moved, along with a schooner she was employing as a tender, under the cover of the fort at Gosier.

Picque made several feints towards HMS Blanche as if intending to engage in combat but pulled back each time. About 1 pm, Blanche took as a prize an American schooner out of Bordeaux with a cargo of wine and brandy. Picque bore down on Blanche and fired four shots at her from beyond the range of shot, as Blanche turned to meet this challenge Picque retreated.