The last novel I summarized on this blog was the C. Northcote Parkinson novel, featuring is character Richard Delancey, Dead Reckoning. The book covers about five years of Delancey’s career and involves operations in Borneo and, most significantly, against the remaining French possessions centered on Mauritius.

I’ll be using the next few posts to acquaint you with some of the characters involved in the campaign and some of the actions which lead up to it.

(photo located here)
We briefly mention Commander Conway Shipley in the story below, Capture of l’Egyptienne. In that story he is the 21 year old commander of HMS Hippomenes who gave chase to, and captured, the 36-gun privateer l’Egyptienne in the Windward Islands. But sometimes these marginal notes become interesting stories in their own right.

Shipley was the son of William Davies Shipley, the dean of St. Asaph, who had achieved some degree of notoriety in his own right as the subject of a libel prosecution by the Crown.

We don’t know much about Shipley. We can presume that he went to sea in his early teens and had probably been carried on the muster roll of one or more ships since age five or so because he was already a commander at age 21. Based on his encounter with l’Egyptienne he seems to have been an energetic officer and after that adventure he remained in command of Hippomenes until November when he was posted captain. END_OF_DOCUMENT_TOKEN_TO_BE_REPLACED

HMS Pallas at the Corduoan Light 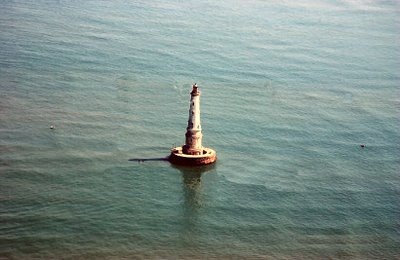 I decided to do one more Lord Cochrane piece before moving on to something else. This episode predates The Boats of HMS Impérieuse by a year. At the time Cochrane was commanding the 32-gun 12-pounder frigate HMS Pallas with a crew of about 220 and was part of a British squadron blockading the port of Bordeaux. Cochrane had made a habit of raiding deep up the Gironde estuary and had a crew well drilled in small boat work. Cochrane had even had a galley constructed to his own specifications for the express purpose of cutting out enemy shipping and raiding coastal installations.

On April 5, 1806, Pallas was anchored just off the Cordouan light, pictured above, at the mouth of the Gironde. Cochrane received word from local informants that two French corvettes were anchored some 20 miles farther up the river and naturally decided to cut them out.

The plan was equal parts simplicity and audacity.

END_OF_DOCUMENT_TOKEN_TO_BE_REPLACED 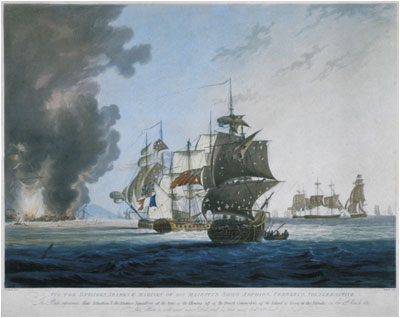 The Napoleonic Wars encompassed theaters of operations throughout the world. The main theaters shifted over time but some theaters were destined to remain strategic backwaters. The Adriatic was one of those.

The Venetian Republic had ceased to exist when it was overrun by the troops of Revolutionary France in 1797. Ceded to Austria under the treaty that ended the War of the First Coalition, Venice was an Austrian province until 1805. When the Treaty of Pressburg was signed, in the aftermath of disastrous defeats at the hands of the French at Ulm and Austerlitz and the collapse of the Third Coalition, Venice was stripped from Austrian control and became part of Napoleon’s short lived Kingdom of Italy.

While the Adriatic was of little strategic import to the British it was an important source of naval stores for France and so raiding commerce in the Adriatic became a priority for the British Navy. END_OF_DOCUMENT_TOKEN_TO_BE_REPLACED

The Battle of Navarino: Twilight for the Age of Sail

This photo shows the coastal road at Villasar de Mar, a bit north of Barcelona, where the squadron operating under the command of Captain Edward Codrington caught and mauled a French infantry division on the march, a story told below.

Captain Codrington vs The French Army

The ship crept through the water; not a sound from the crew, standing tense at their guns — only the faint sweet music of the breeze in the rigging, and the lapping of the water overside. Now they were level with the infantry column, a long dense mass of blue-coated and white-breeched soldiers, stepping out manfully, a little unreal in the haze of dust. Above the blue coats could be seen the white lines of their faces — every face was turned towards the pretty white-sailed ship creeping over the blue-enamel water. It was a welcome diversion in a weary march, during a war when every day demanded its march. Gerard was giving no orders for a change of elevation at the moment — here the road ran level for a half a mile, fifty feet above the sea. Hornblower put his silver whistle to his lips. Gerard had seen the gesture. Before Hornblower could blow, the centre main-deck gun had exploded, and a moment later the whole broadside followed with a hideous crash. The Sutherland heeled to the recoil, and the white, bitter-tasting smoke came billowing up.

“God, look at that!” exclaimed Bush.

The forty-one balls from the Sutherland’s broadside and cannonades had swept the road from side to side. Fifty yards of the column had been cut to fragments. Whole files had been swept away; the survivors stood dazed and stupid. The gun trucks roared as the guns were run out again, and the Sutherland lurched once more at the second broadside. There was another gap in the column now, just behind the first.

This, of course, is from C. S. Forester’s Horatio Hornblower novel, Ship of the Line, and is a graphic depiction of what a ship of the line could do to ground troops under the right combination of circumstances. Hornblower’s actions are fiction, could this happen in real life? END_OF_DOCUMENT_TOKEN_TO_BE_REPLACED

Age Of Sail
Blog at WordPress.com.