We periodically take side trips to geographical points so that places mentioned in novels set during the Age of Sail are presented in context (see our Geography category). We recently looked at syphilis and it’s treatment by calomel of mercury for the same reason.

We’ll now hit another disease which terrorized sailors and landsmen alike during the Age of Sail. Yellow fever, also known as yellow jack.

END_OF_DOCUMENT_TOKEN_TO_BE_REPLACED

“A night with Venus, a lifetime with Mercury” 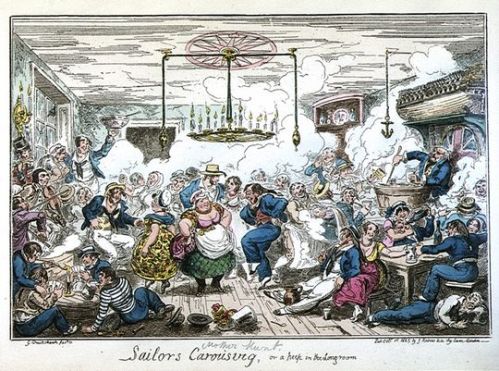 The sailor during the Age of Sail rather epitomized the concept of “work hard, play hard.” When at sea, he could be called on deck at all hours in all weather to set or reef sail. When in port and allowed ashore, or even if he wasn’t allowed ashore and the ship went “out of discipline” he engaged in Biblical levels of debauchery. Naturally, the “Portsmouth brutes” that one would expect to think nothing of spending days and nights between decks of a man o’ war with 28-inches of space allocate per hammock brought more than ambiance on board. They also brought syphilis.